Our beloved Grakn Community, Grakn Core 1.4 is finally released! And, it comes with the very much anticipated: Grakn Workbase 1.0! 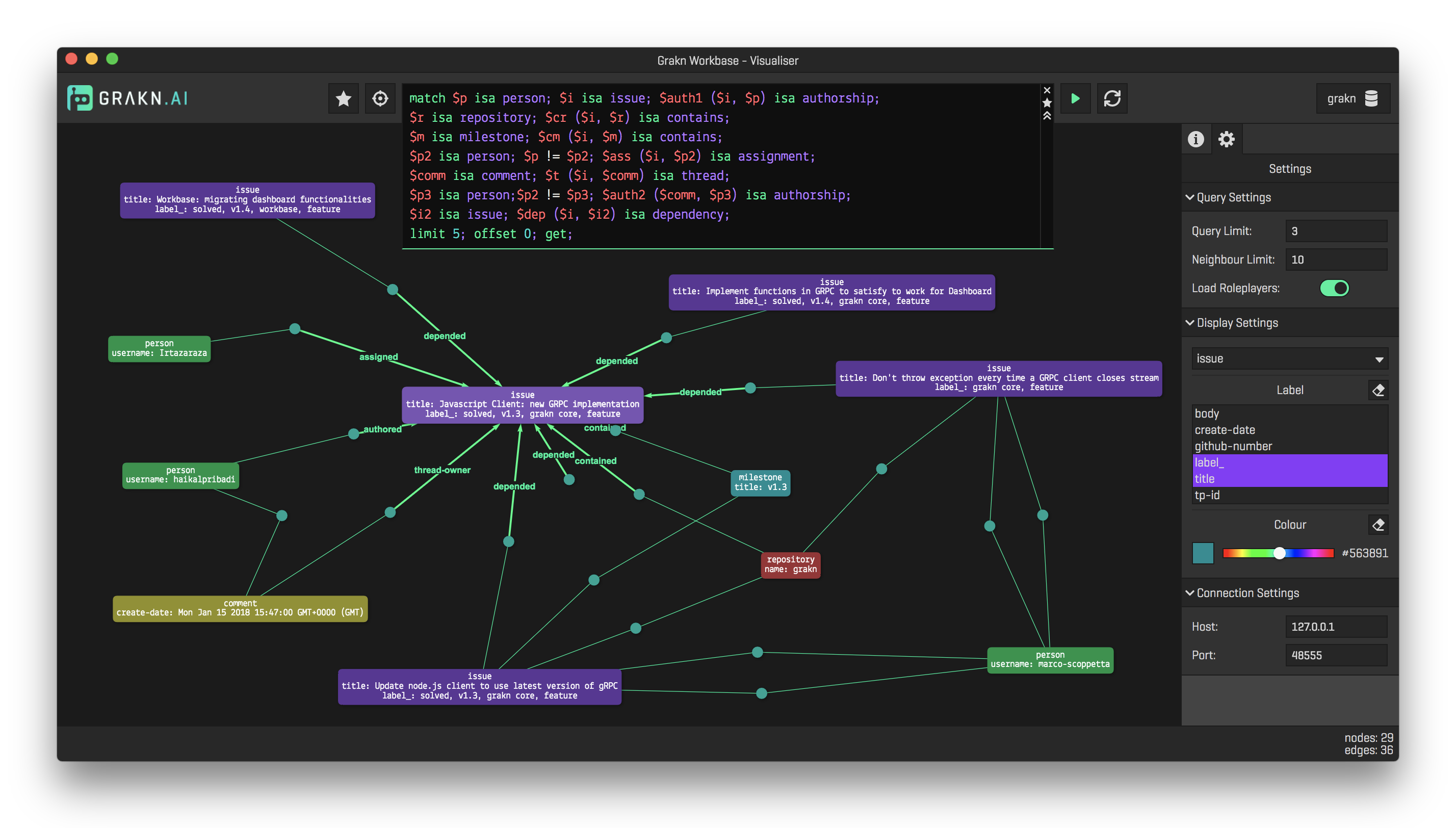 Well done to our Grakn Warriors (kuple!) and, as always, thank you so much to our amazing community for helping us improve Grakn every day of the journey!

As we promised in the previous release, we started making smaller faster releases. This release includes 4 key improvements - but major improvements nonetheless, focusing on performance, reliability and usability.

All our Windows-based community members, we heard you, we did not forget about you! @marco fought the battle: upgraded Cassandra from 2.17 to 3.11.3, and rearchitected Grakn to bring it to you on Windows! You can download it directly from the Grakn Download Centre

@kasper made some reasoning performance improvements based on rule pruning as well as corrected a number of issues with the way attributes are handled.

And finally, Workbase is born into this world!

@syed and @marco has put in a lot of hard work into our new “Knowledge IDE” - starting with the visualiser. Why? Performance, and performance! And usability, of course. This first release is already available for Linux, Mac and Windows. You can download it directly from the Grakn Workbase 1.0.0 release page on GitHub (the download centre page for Workbase may take a few days to be updated).

(Other than continuous improvement of Grakn as a database …)

There a lot more development going on in our team, which you will see be released over the coming week (or two). (You may also already saw the intro to BioGrakn too.)

Building upon the work done by one of our community members, Antonio Messina, @tomas, @syed and @soroush have been diving deep into the bioinformatics space to study how Grakn can accelerate biomedical knowledge discovery. You can read more about it in the BioGrakn article by @tomas. We’ll be making the codebase public on github.com/graknlabs/biograkn to collaborate with the community - watch this repo over the coming weeks!

We heard that some of our community members are trying to build a benchmarking system for Grakn - so are we! @joshua is almost done with the first MVP of Grakn Benchmark. He’ll be pushing it to github.com/graknlabs/benchmark repo - let us know of your ideas aand we’d love to collaborate!

It’s about time we talk about this: how does Grakn, a knowledge graph, apply to and empower intelligent systems, such as NLP, ML, and Expert systems? @james has embarked on this research and will be sharing his insights and discoveries on github.com/graknlabs/research. We know many of you have lots of good ideas in this space - we want to hear them!

Going forward, we will be putting more focus on examples and development guides. We want it to be as easy as possible for anyone to adopt Grakn in any development environment. As a first step, @soroush has started building a repository of code examples along with tutorials, which you can find at github.com/graknlabs/examples, but will also be integrated to the documentation website very shortly. @soroush will also be transforming our documentation platform to focus more on developer learning, migration and adoption journey!

Grakn KGMS is launching on AWS

You can now start counting down the days. @kasper and @tomas are working hard on this, and Grakn Enterprise KGMS is going live on Amazon AWS very soon!!!

And last but not least …

GitHub all the way!

First of all, we apologise for not having given the GitHub issues you submitted the attention they deserve! It was because our project management platform was on a different system. But we’ve finally realised that the best way for us to collaborate and engage with everyone in the community, as we develop Grakn, is to centralise our development tickets (aka. functionalities/bugs, aka. “issues”) on GitHub. Our grakn-bot did all the heavy-lifting and migrated all our issues to GitHub, which you can now also contribute to! Check them out at github.com/graknlabs/grakn/issues (and every other repo).

What happened to the Github repo? I don’t see it anymore.

Very excited to see this post! will spend sometime on BioGrakn and those integrations with AI techs.